Stiction in the Modern Diesel Engine 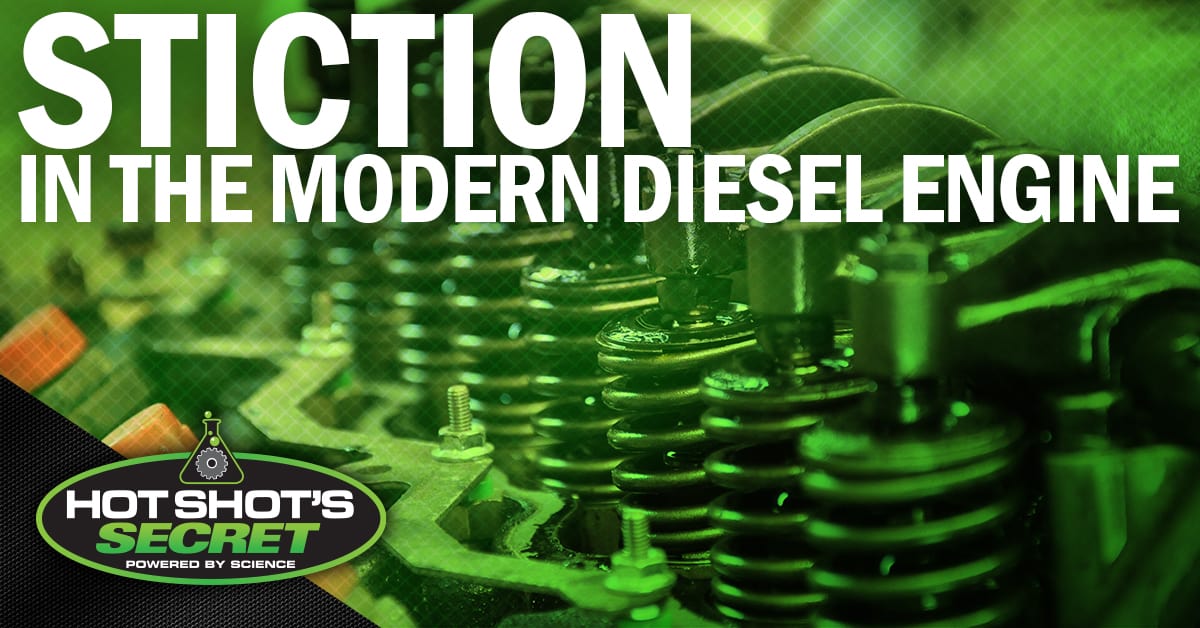 It’s hard to believe that it has been over 25 years since the market began learning about all the problems that would arise from both the 6.0L and 7.3L Power Stroke diesel engines and their HEUI injector systems. Since the HEUI injectors came in direct contact with the engine oil, many injectors failed as oil varnish began to build up inside the injectors causing them to stick. Soon after these problems started coming to the surface, Hot Shot’s Secret Stiction Eliminator was formulated and helped not only to restore these “failed” injectors, but also prevent the issue from happening all together. Although Stiction Eliminator was a life saver to Ford and everyone who owned a HEUI system at the time, it wasn’t long before the common rail injector system was launched and the HEUI injector system was old news.

Much has changed in the design of engines in the past couple of decades. The modern diesel engine is an entirely different beast with many efficiencies and emissions standards in place today. One thing that has not changed is Stiction Eliminator’s ability to clean and lubricate an oil system. Although there are fewer HEUI injectors to clean up today, oil still oxidizes and adds sludge to a vehicle’s oil pumps, turbos and rings. And in the modern diesel, new efficiency standards require much tighter tolerances, making a clean and well lubricated engine a must. Once oil varnish starts to build inside the engine, power and efficiency quickly begin to fade and eventually cause permanent damage to engine components.

The word “Stiction” comes from a process that occurs in all engines; i.e. “sticky-friction” caused by burnt oil that builds up inside an engine over time. As stiction develops, it can only be removed by an oil additive with strong cleaning properties. Oil alone will never provide the cleaning capabilities needed to fully clean and restore lost efficiency. Many competing products attack stiction with harsh solvents that are so potent, they also cause damage to the engine if not removed quickly enough.

The Secret to Reducing Wear

Hot Shot’s Secret Stiction Eliminator is composed of a safe but effective synthetic cleaner that dissolves stiction and prevents future buildup. Blended with the company’s patented nano lubricant – FR3 Friction Reducer, Stiction Eliminator is proven to reduce wear up to 62% more than engine oil alone making it the only high functioning, multi-purpose additive on the market.

Heat and Pressure is Bad

High heat and high pressure is the recipe for creating stiction, which is the nature of the beast inside any engine as long as it runs on fuel and uses oil as its lubricant. This means that even inside a gasoline engine, stiction will be present. Fortunately, Stiction Eliminator provides a gentle cleaning agent that makes it suitable for both gas and diesel engines. Next time you change your oil, whether in your car, truck, tractor, RV or lawn mower, think about what may be sticking around inside the engine while the rest of that black (once golden brown) oil is pouring out. Clean up that burnt, sticky oil by adding a treatment of Hot Shot’s Secret’s Stiction Eliminator to your next oil change and restore lost power and efficiency, while extending the life of your vehicle or equipment.