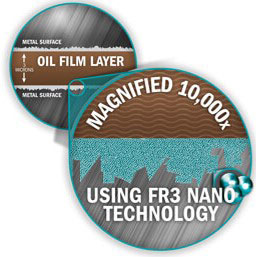 What others are saying

You rely on your friction reducer to protect your engine’s components from wear and improve your vehicle’s fuel economy. As a result, you want to make sure you choose the right oil additive for your engine. To make an informed purchasing decision, review answers to some of the most commonly asked questions about FR3 below.

How does FR3 Friction Reducer work?

FR3 is an oil additive that boosts lubricity using three synthetic lubricants. These lubricants work together to increase horsepower, combustion efficiency and base oil performance.

One of the synthetic lubricants in FR3 — made from round nano carbon particles less than 10 nanometers in diameter — also reduces wear on engine components by filling in imperfections and creating a smoother surface for the lubricating film to form. Hot Shot’s Secret FR3 Friction Reducer has a negative charge, which allows it to effectively adhere to oil-wetted engine components.

Will FR3 Friction Reducer work with my engine?

When should I add FR3 to my engine’s oil?

You should add FR3 Friction Reducer to your engine’s base oil during each regularly scheduled oil change. The treatment ratio for our oil friction reducer is 1.5 ounces of FR3 per quart of oil. FR3 is compatible with most mineral and synthetic base oils, as well as motor, transmission, gear and hydraulic oils, so you can feel comfortable adding it to your vehicle’s most critical systems.

Can I use FR3 with other oil additives?

We do not recommend using FR3 Friction Reducer at the same time as any other oil additives, including our own. However, you can alternate using FR3 and Hot Shot’s Secret Stiction Eliminator to help remove the buildup created by burnt oil. For the best results, use Stiction Eliminator for the first oil change and FR3 Friction Reducer for the next two oil changes, then repeat the cycle.

Using FR3 will not damage your engine’s components or void your manufacturer’s warranty. That’s a guarantee. The Magnuson-Moss Warranty Act prevents manufacturers from using unfair or misleading warranty disclaimers, and it also ensures your warranty remains in effect when you use our additives. Just remember to use FR3 with a type of oil recommended by your manufacturer for use with your engine.

If you have additional questions about FR3 Friction Reducer, feel free to reach out to us for more information. At Hot Shot’s Secret, our knowledgeable team is always happy to help customers find the right oil additives for their needs.

FR3 Friction Reducer comes in containers ranging from 8 ounces to 5 gallons. To order, select a size and add it to your cart, or call 1-800-341-6516 for case-quantity discounts.