What is a HFRR number, and why does it matter?

What is a HFRR test?

Lubricity has always been an important factor in the quality of diesel fuels. Although more recent changes to fuel itself and tighter tolerances in modern engines, makes understanding a fuel’s lubricity more important now, than ever. To fully understand how to interpret a fuel’s lubricity, it is helpful to understand how the lubricity rating is achieved. There are many standard test methods to determine lubricity, however the most common and perhaps the most effective is the High Frequency Reciprocating Rig (HFRR) test using the ASTM D-6079 test method.

The HFRR test was developed over 20 years ago and has stood up to all of the changes made to fuels and engines since its development. Increased use of biofuel, reduction of sulphur and continuous changes within the mechanics of the engine have all relied on the HFRR test to accurately set the standards for lubricity, and has proven reliable time and time again. The test consists of submerging a contact point between a steel ball and a flat steel disc into a sample amount of fuel. Under a controlled environment, the temperature is set to approximately 140℉ and the ball is placed under a light load and moves back and forth at a set frequency for 75 minutes. During the test, friction levels and temperature are monitored. After 75 minutes, the wear scar is measured both parallel and perpendicular to the sliding direction and the average wear scar is recorded. The results are measured in μm (microns), and the standard limit in the US is 520μm, while in Europe and the Engine Manufacturers Association (EMA) standard is 460μm.

Why is lubricity important?

In today’s engines, many components of the fuel system rely solely on the fuel for its lubricity. With Ultra-Low Sulfur Diesel fuel, a lack of sulfur means a lack of oxygen and nitrogen, which are both major players in adding lubricity. When the fuel’s lubricity falls out of spec, costly damages can be done to the fuel injection system, making lubricity one of the most important parameters to monitor in diesel fuel. With a recent lawsuit claiming that the Bosch CP4 high-pressure fuel injection pump installed within a variety of diesel vehicles is failing prematurely, many are questioning the use of the CP4, how to repair the damages, while more and more owners are seeking preventative measures to avoid becoming another statistic of costly repairs. During the degradation of the parts, metal shavings are traveling through the entire fuel system, including the fuel injectors and the fuel lines thereby causing more friction and abrasive compounds throughout the travel of the fuel. Once failure happens, you will need to not only replace the pump, but often lines, injectors and other fuel system parts.

The Bosch CP4 fuel pump has an unusually high failure rate in the U.S., upwards of 7%, when compared to 1% failure rate in Europe. Why is the failing CP4 is being installed in so many vehicles? When leaving the manufacturer, however, the CP4 pump is typically successful, because the pump is manufactured in Europe. The difference being that the lubricity has not been removed from the European diesel fuel, as it has in the U.S. fuel. The European EN-590 Diesel has a Wear Scar Diameter 460-micron specification, while in the U.S. the base is 520-micron in ASTM US D-975. Therefore, the failure is caused by the lack of lubricity in ultra low sulfur fuel in the USA. 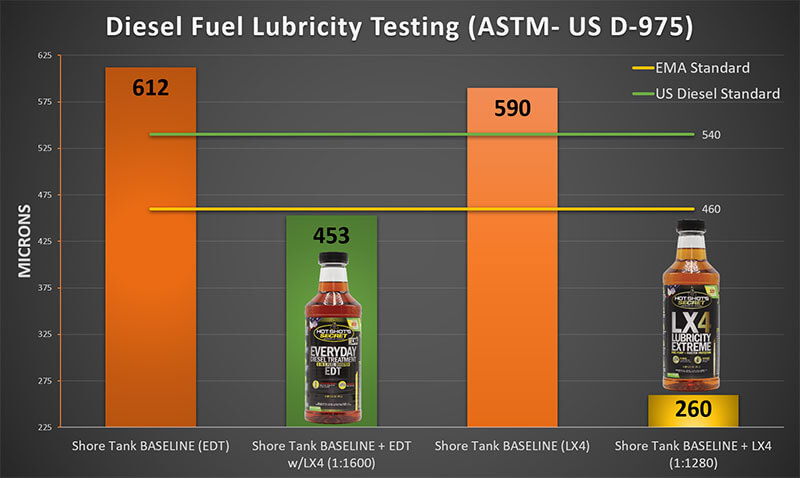 Even a Premium Dose of EDT at 1 oz. per 25 gallons of diesel fuel gets fuel below the 460 micron score.

Using a quality fuel additive is an effective way to ensure the lubricity of your fuel remains. There are many options when it comes to choosing the best
lubricity additive, however, one of the most proven additives is Hot Shot’s Secret LX4 Lubricity Extreme. LX4 is proven to increase a fuel’s lubricity by up to 56% in the ASTM D-6079 (HFRR) test. That is enough to bring even the poorest of fuel back into spec. To have the ultimate protection plus performance use Everyday Diesel Treatment to increase cetane for better fuel economy. In addition, it contains an injector cleaner, water demulsifier, storage and stability, rust and corrosion inhibitor and most importantly the LX4 lubricity agent.

Monitoring fuel’s lubricity is more important now, than ever. And there is no better method than the HFRR test to accurately determine lubricity levels. Most everyday diesel owner’s will not need to worry about owning or operating an HFRR themselves, however, it is important that they understand how to interpret a lubricity rating and why it is important to the longevity of their diesel engines.