The Hot Shot’s Secret brand was built on our flagship product, Stiction Eliminator. We were commissioned by International Truck and Engine to formulate a product that eliminated the performance and warranty issues caused by stiction in the Navistar and Ford Powerstroke Hydraulic Electric Unit Injectors (HEUI injectors). Over the past 20+ years, we have continued to test, improve and find additional uses and benefits from the Original Stiction Eliminator.

If you are experiencing white smoke, rough running/idling or misfires, stiction is likely the problem. If your diesel hesitates to accelerate or has been losing power, then you could be experiencing stiction. A steady and consistent drop in your MPG can also be an indicator of a stiction problem.

Stiction is our term for the sticky friction caused by byproducts of burnt oil. High pressure builds extreme heat in tight tolerance applications, such as inside HEUI injectors. This extreme heat causes the oil to burn, oxidize and create layers of sludge and deposits. We found that many of the issues that Navistar and others were experiencing were caused by stiction in the oil cavities and on the spool valve in HEUI injectors.

In the case of HEUI injectors, computer diagnostics showing that HEUI injectors were failing were restored 9 out of 10 times after using Stiction Eliminator. Removing the stiction from HEUI injectors eliminates the hard starting when cold, bucking, chugging, missing and black smoke.
Stiction Eliminator restores HEUI injectors back to factory specifications and rejuvenates your engine to optimal performance by restoring the oil flow through the injectors, which corrects injector timing, fuel flow and the spray pattern of your injectors.

Stiction Eliminator cleans the gum, varnish and stiction while also lubricating everything the oil touches inside your engine. Through extensive testing, we found that the chemistry of Stiction Eliminator, which restores HEUI injectors, also hold true for many other engine components. Stiction can form on many of the oil-wetted components inside your engine, like turbocharger bearings for example, which can reach temperatures upwards of 400°F. Turbocharger bearings operate with tight tolerance and extreme heat as mentioned above and are a known spot for stiction. Stiction Eliminator cleans the stiction from turbo bearings, which reduces spool time and helps you build maximum boost sooner in the RPM range.

Oil passages are kept clean, restoring the oil flow through your engine. Pistons, rings and oil pumps are also cleaned and lubricated. Dynamic compression is restored by increased ring sealing, providing improved combustion efficiency which translates to better fuel economy, power and a better running engine. Stiction Eliminator has been tested and proven on thousands of gasoline and diesel engines, from small lawn mower engines to large diesels.

Stiction Eliminator is composed of a safe but effective synthetic cleaner that dissolves the stiction found on oil-wetted components, resulting in a rating of 92% clean in the ASTM D4828 scrub test. A Group V synthetic ester assists in bringing deposits and additives back into solution, reducing friction and lubricating your oil system. Patented carbon nano particles are blended into Stiction Eliminator, filling in microscopic irregularities on the machined surface to provide a smoother surface for the lubricating film to form, which reduces friction and wear. Adding Stiction Eliminator to your engine oil results in a 62% decrease in wear over oil alone as verified by ASTM G-133 Third Party testing. The result is a cleaner, better running and longer lasting engine. 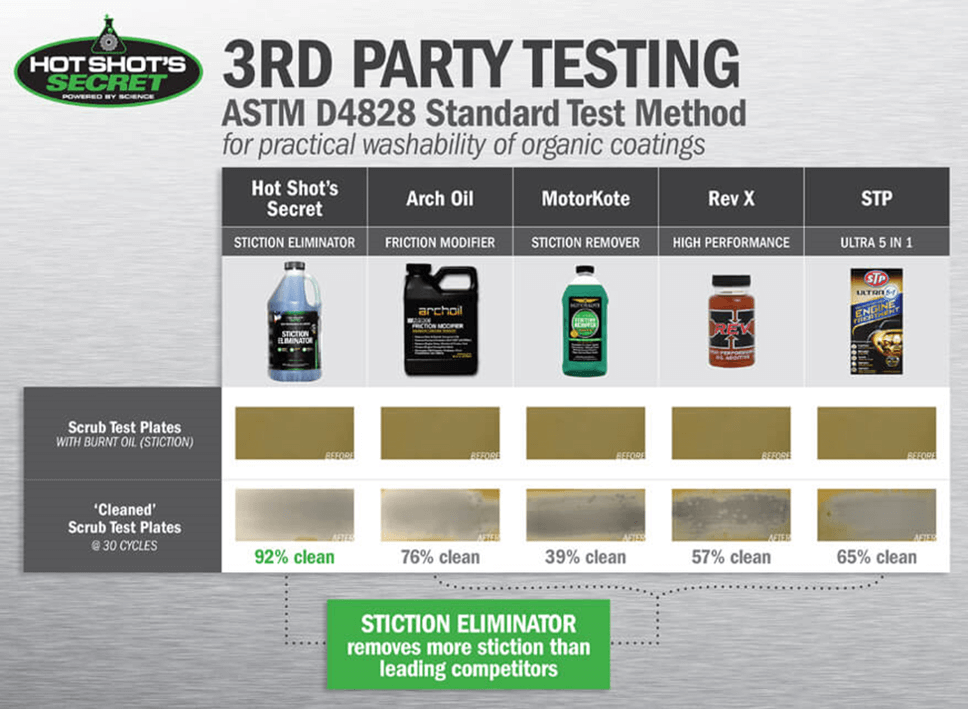 Even if you aren’t experiencing the symptoms associated with stiction, it is still being created. Stiction Eliminator should be used a preventative measure to avoid stiction problems in the future. Stiction Eliminator was formulated to be left in for the entire duration of your oil’s lifetime. It is not a flush that contains harsh solvents which can potentially harm your engine.

Stiction Eliminator’s unique chemistry allows it to clean and lubricate oil-wetted components safely, which cannot be accomplished with many of the competitor products available. Whether used to solve an existing problem or as a preventative measure, Stiction Eliminator is guaranteed to clean and protect your engine.

Some products that are used to clean out stiction, the sludge and varnish created from burnt oil, contain harsh solvents and can cause wear to your engine. These products are meant to be added your engine oil and then removed shortly thereafter. This must be done so further harm doesn’t take place inside your engine. This also means these types of products cannot be as effective.

Hot Shot’s Secret Stiction Eliminator contains zero harmful solvents and was engineered to be left in your engine oil for thousands of miles. It contains a synthetic cleaner that safely and effectively removes stiction, while also lubricating. Stiction Eliminator can reduce wear up to 62% more than engine oil alone by removing stiction and using a nano lubricant. Stiction build up can lead to scarring of vital engine components which lead to failure. Removing stiction from the engine solves this problem. The nano lubricant inside Stiction Eliminator also reduces the coefficient of friction, further reducing the normal wear and tear that takes place inside engines.

Learn about how it all got started at Hot Shot's Secret!

Stiction Eliminator is guaranteed to improve your vehicle’s performance or your money back.

Stiction Eliminator is safe and effective for use in all diesel and gasoline engines: semi-trucks, pick-up trucks, farm equipment, and autos. These include but are not limited to Ford Powerstroke, Dodge Cummins, GM Duramax, Saab, Volkswagen, Audi, Caterpillar, and Detroit.

I have a 2006 F350 6.0 and have gone thru it all, with 235,000 miles on it now, I lost 3 cylinders according to the computer reading and was freaking out that the repair was going to cost $2500 to $4500, after reading this web site I decided to try out the fuel and oil treatment, at $80 for both additives it was worth a try, I changed the oil and added the 2 qt of Hotshot's (Stiction Eliminator) and put the fuel additive (Diesel Extreme) in as well, I put a weight on the gas pedal to set at about 1400 RPMs and let it run, after 6 hrs it was purring like a kitten, retested the injectors with the computer and all are firing correctly, I never write reviews but i had too on this one, I didn’t have the money to replace injectors. I am sold and will keep up with the maintenance that Hotshot recommends. Thanks.
Clint Wolf

TALK TO AN EXPERT