Many diesel owners are on high alert. With a recent lawsuit claiming that the Bosch CP4 high-pressure fuel injection pump installed within a variety of diesel vehicles is failing prematurely, many are questioning the use of the CP4, how to repair the damages, while more and more owners are seeking preventative measures to avoid becoming another statistic of costly repairs.

A variety of vehicles makes and models are susceptible to the failing pump:

The CAUSE of the Problem

The CAUSE of the Failures: Lack of Lubricity in the Fuel

Today’s Ultra-Low Sulfur Diesel (ULSD) does not contain the lubricity needed to fully protect our vehicles. The Bosch CP4 fuel pump has an unusually high failure rate in the U.S., upwards of 7%, when compared to 1% failure rate in Europe. Why is the failing CP4 is being installed in so many vehicles? When leaving the manufacturer, however, the CP4 pump is typically successful, because the pump is manufactured in Europe. The difference being that the lubricity has not been removed from the European diesel fuel, as it has in the U.S. fuel. The European EN-590 Diesel has a Wear Scar Diameter 460-micron specification, while in the U.S. the base is 520-micron in ASTM US D-975. Therefore, the failure is caused by the lack of lubricity in ultra low sulfur fuel in the USA.

More so, the failure is the lack of the proper additives used to supplement fuel degradation and the ability to restore the lubricity that is easily available. For those that have gone without, and simply relying on the untreated fuel, yes, the lack of lubricity in ULSD fuel has caused the breakdown. With one extra step, however, by adding the correct fuel additive, lubricity can be restored, and the pump will operate in a similar circumstance as originally manufactured in Europe.

The lack of lubricity in ULSD is the main factor in the catastrophic failures of the CP4 Fuel pumps. High rates of wear introduce metal shavings into the fuel system, creating wear that damages your injectors, cylinder walls, pistons and rings costing several thousands of dollars to repair.

The Failure Defined:
In an attempt to improve fuel efficiency, the CP4 injection pump replaced the CP3 pump to create a higher-pressure expulsion with less fuel volume consumed.

During the degradation of the parts, metal shavings are traveling through the entire fuel system, including the fuel injectors and the fuel lines thereby causing more friction and abrasive compounds throughout the travel of the fuel.

The attempt to reduce fuel consumption is a compounded effect of low-quality fuel with less sulfur lubricity, and then less of the fuel itself. The double negative is a direct reduction of lubricity in the system.

LX4 LUBRICITY EXTREME is a premium lubricity additive for Ultra-Low Sulfur Diesel (ULSD) and gasoline. Ultra-low Sulfur diesel additive contains the highest level of lubricity performance on the market and can put even the poorest quality fuel back into specification and exceed OEM requirements for lubrication. Use this CP4 fuel system saver to greatly increase fuel’s lubricity and prevent the wear and scarring of key components inside the fuel system, including pumps and injectors. This diesel fuel lubricant is warranty safe and emissions equipment safe.

The Engine Manufacturers Association recommends all diesel fuel should be below the 460-micron specification to protect all fuel injection systems. 3rd party ASTM D-6079 testing of LX4 showed that fuel that was out of specification would be brought down below the 460-micron level that is necessary to protect injectors and pumps from premature failure. 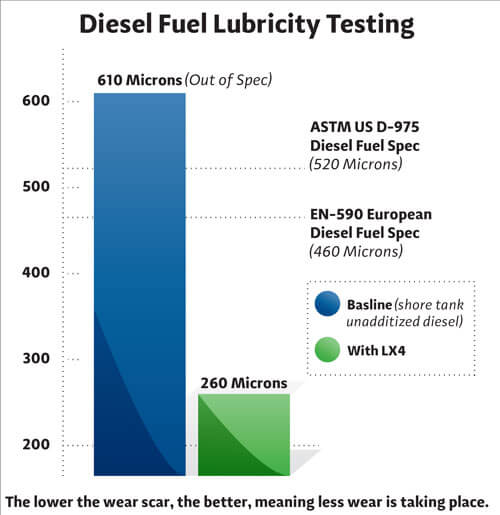 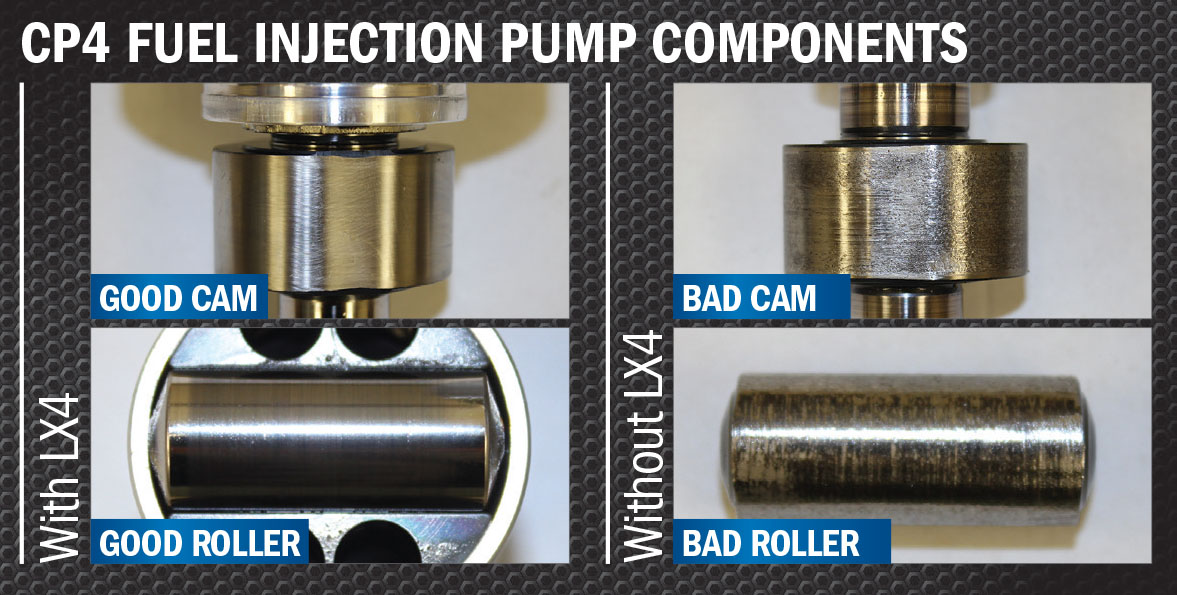 No other additive has a better guarantee than Hot Shot’s Secret.
If any of our products do not deliver as promised, then we will give your money back.

Triple-Threat Testing Process
We understand what it’s like to be disappointed by products that do not live up to their claims. That’s why all Hot Shot’s Secret products are subject to rigorous, scientific, triple-threat testing:

Testing in our world-class R&D lab
Independent, third-party dynamometer testing
Real-world testing
We know what the results are before you buy the product, ensuring that the product you purchase outperforms the other solutions on the market.

TALK TO AN EXPERT