RECOMMENDED FOR ALL DIESEL ENGINES.

Hot Shot’s Secret Diesel Extreme is a premium 6-in-1 diesel additive, containing the most concentrated detergent formula on the market. Diesel Extreme fuel additive is formulated to resolve issues related to Ultra-Low Sulfur Diesel and greatly improve your truck’s performance and fuel economy.

This diesel fuel cleaner product is safe for all emissions equipment.

Recommended Frequency:
Use one treatment of Diesel Extreme every 6000 miles.

In order to effectively improve your diesel’s fuel economy, horsepower and combustibility, your fuel system needs to be clean of deposits and run fuel with a high cetane rating. Diesel Extreme not only cleans exceptionally well, it also provides a powerful cetane boost of 7 points. This allows for the fuel to burn more efficiently, increasing performance while also reducing diesel particulate filter (DPF) regenerations. The lubricity additive in Diesel Extreme also increases your fuel’s lubricity, improving protection and reducing wear. This helps combat the ill-effects of Ultra-Low Sulfur Diesel.

Diesel Extreme is a fully-formulated 6-in-1 diesel additive that addresses both common and uncommon problems with diesel fuel, making sure your diesel is always running at peak performance. 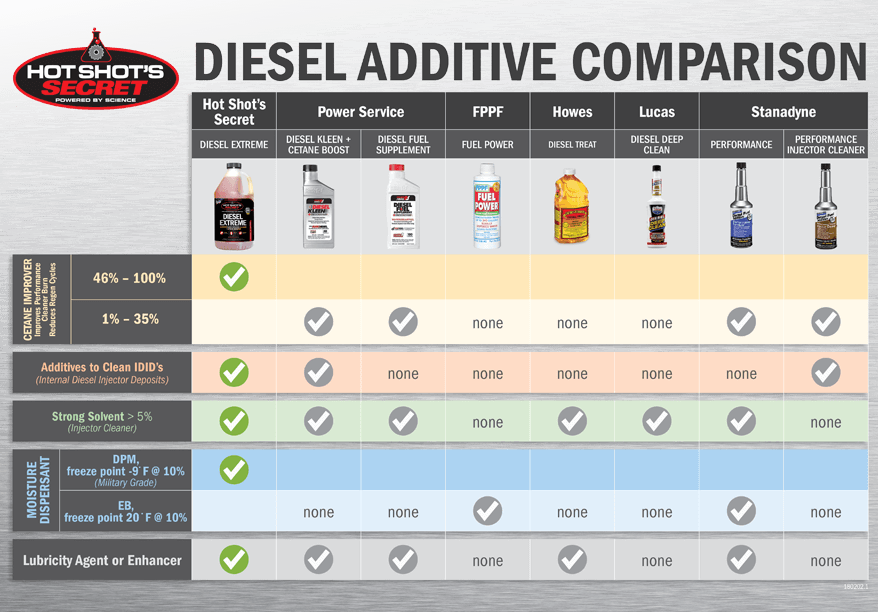 The introduction of Ultra-Low Sulfur Diesel (ULSD) coupled with today’s highly engineered fuel systems are creating new problems for diesel owners. Sulfur was a very good lubricant. The removal of sulfur causes all the moving parts in your fuel system to suffer. Waxy soap deposits that were soluble in higher sulfur content fuels are now being formed and are difficult to filter. Fuel systems incorporating High Pressure Common Rail Injectors operate at higher pressures which create high heat. This heat chemically changes the hydrocarbons in the fuel to longer chain hydrocarbons called asphaltenes, which can block fuel filters. The tolerances for the Common Rail injectors are very tight, sometimes around 1-3 microns. This means even small deposits can cause an injector to stick.

Several sources of sodium and calcium contamination occur from residual refinery salts, storage tanks, ship ballasts and biodiesel catalysts, to name a few. Dodecenyl succinic acid (DDS) and hexadecenyl succinic acid (HDS) are commonly found in certain pipeline corrosion inhibitors, refineries and aftermarket additive packages. When the contamination from the sodium or calcium reacts with the DDS or HDS, carboxylic salts are formed. These carboxylic salts have very low solubility in ULSD and are very difficult to filter. They end up depositing on the internals of your fuel injectors causing what are known as Internal Diesel Injector Deposits (IDID’s).

With your diesel fuel void of carboxylic salts, waxy deposits, asphaltenes and glycerides in suspension, the problems with filter plugging and injector deposits are solved. DDS and HDS acids are neutralized by the injector cleaner to keep more carboxylic salts from forming. Independent testing has shown that power loss is restored up to 87% in the Peugeot CEC F98-08 DW-10 test with the keep clean level of injector cleaner found in Diesel Extreme. It also passes the ASTM D2068 Filter Blocking Test.

The Cetane levels found in diesel fuel in most states are around 42 to 45. The minimum required by ASTM D 975 is 40. Most diesel engines operate more efficiently with a fuel that has a cetane rating of 48 to 50. Fuels with higher cetane burn more efficiently and more completely than those with lower cetane ratings. Diesel Extreme contains a cetane improver that will raise your cetane number 7 points. There are many advantages to an increase cetane numbers. Cold starting is improved, and less black smoke is seen as a result of the improved combustion efficiency. Less hydrocarbons and particulate matter in your exhaust reduce the blocking of your Diesel Particulate Filter and using Diesel Extreme in your fuel has been shown to have 83% less DPF regenerations, saving you time and money. Increased cetane levels have also shown to improve fuel mileage and power. Fleet tests with Diesel Extreme have shown an improvement in fuel mileage up to 7.3% due to the combination of our injector cleaner and cetane improver. This combination is also responsible for restored throttle response.

Diesel Extreme contains a neutral lubricity additive for fuel pump and injectors that has a proven a wear scar reduction of 60µm in ASTM D6079 test. A Military grade non-alcohol-based water dispersant lowers the freeze point of water in fuel over 32°F over competitors water dispersants. With the condensed water in the fuel removed, the major cause of rust, icing in cold weather and the growth of microorganisms in warm weather is inhibited. Diesel Extreme also contains a package that inhibits rust and corrosion in the tank and lines and has a NACE corrosion test rating of A. To round out the package, a specialty fuel stabilizer was chosen that contains anti-oxidants, metal deactivators and dispersants.

0 reviews with a 4-star rating

There are no reviews with a 4-star rating yet